"Super Sylphide" is a novel autopilot system for small UAVs (Unmanned Aerial Vehicles) whose weight is defined as about one or two kilograms. These UAVs are developed actively especially in the aeronautics research field. This is because they have potential to achieve many practical tasks such as autonomous disaster monitoring, and they are so easy to handle that they do not require runway to take off.
However, small UAVs have not been capable of desirable autonomy and intelligence yet. In other words, what they can do now is only to take aerial photos along a pre-planned path, and they have to be helped by a human operator in many situations. This is mainly due to their strict limitaions on the payload weight, size and cost. Especially, it is a serious problem that navigation devices which are more accurate than a stand-alone GPS receiver, and powerful processors to run more robust but complicated algorithms than the classical PID are not installed. Therefore, the development of "Super Sylphide", whose features are to provide accurate navigation data with the INS/GPS integration, and DSP computing for large calculation capacity, is started. The detail is in the following brochure. 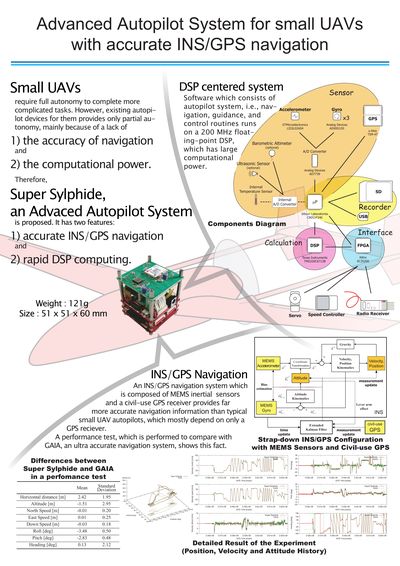 There are several outcomes in the cource of the development. The followings are the related articles which are written in English (the oldest is the top).

Short progress reports with images, and circuit shematic are available in this site. They are originally in Japanese, but you can get machine translation versions when the right upper button "English" is clicked. The following is the list (the latest is the top).

The derivation of the name "Super Sylphide"

The name "Super Sylphide" is derived from the seriese name of aircrafts which stars in my favorite Japanese scientific novel "Sentō Yōsei Yukikaze" written by Kanbayashi Chōhei. The novel is made into anime, and probally available in English.

If you have any questions or comments, please send me an E-mail (the address is the right lower one) with the keyword "Sylphide" included into the title.
December 26, 2006 00:00 fenrir が投稿 : 固定リンク | |